Posted on November 3, 2011 by Lawrence Mandel

FSOSS 2011 (Seneca College’s Free Software and Open Source Symposium) was another great example of the variety of people and projects involved in free and open source software. I was glad to see both Eclipse and Mozilla featured in talks. Here is a quick summary of some of the various happenings at FSOSS 2011. 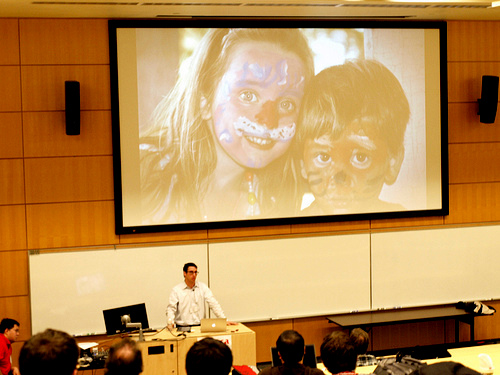 My talk, Take Control of Your TV with XBMC, as far as I know the first XBMC talk at FSOSS, was well attended and received good feedback. This was also my first time speaking about XBMC. It feels great to give something back to this community from which I’ve drawn so much joy in using the XBMC software. The FSOSS tech guys tell me that the recording will be available in about a month. I’ll post back once it’s ready.

I work in Toronto with Armen and Ehsan but this was the first time that Jeff Griffiths and I met face to face. It was great seeing all of the talks by my fellow Mozillians. Here are links to their slides for your reference.

Saturday afternoon Jeff Griffiths, Ehsan Akhgari, and I ran a Mozilla BoF at the FSOSS unconference. The BoF was very well attended (about half of the Saturday conference attendees were there) and featured a number of topics. We discussed some typical issues, like rapid release, the extended support release (ESR) proposal, silent updates, and version numbering. We also talked about Firefox updates in Linux distros and had a great discussion about privacy and your control over your data. While people were very aware of Sync I didn’t gather that many knew about Do Not Track, BrowserID, or Share. Overall, a really great discussion.

Other talks that I think were worth highlighting:

You may also be interested in FSOSS summaries from Armen Zambrano and Jeff Griffiths.