Posted on September 21, 2012 by Lawrence Mandel 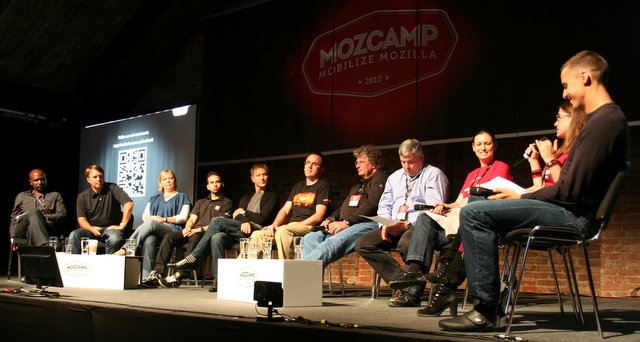 After MozCamp EU 2012, I’m left with one word in my head: passion. This being my first MozCamp, I found it amazing to see focused passion spilling out wherever I turned. The Mozilla community is extremely passionate about Mozilla’s mission, products and people. This passion was on display in the sessions, the random outbursts of Mozilla cheers, and perhaps nowhere more than onstage during the Mozilla community quilt and leadership panel.

For me, most of MozCamp was filled with sessions. In selecting the sessions for the desktop and mobile track, Paul Rouget and I focused on those that had tangible goals and fit within the MozCamp theme “Mobilize Mozilla”. I think this filter for our selection process worked very well. The sessions that I attended (half of the desktop and mobile track) included some lively discussions and brainstorming about what Firefox means to each of us and how to better share Firefox products with the world. I watched groups participate in hands-on debugging sessions, discussed the Firefox release model and release engineering and test processes, and participated in hands-on hacking by building my first mobile add-on. I also presented a session about mobile Web compatibility with Jason Smith in which the passion for this specific topic was clearly evident in the discussion that ensued. (You can see some pictures of these sessions in my Flickr photo stream.) I would like to thank all of our desktop and mobile session presenters and encourage each of you to write or comment about the success of your individual sessions. 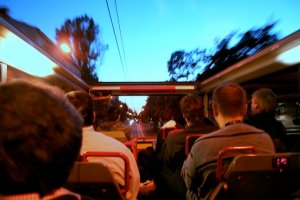 In attending an event like MozCamp I typically have two high level goals: learn and build relationships. The event venue (an old marmalade factory) provided an interesting place to work during the day. I think the desktop and mobile sessions were a very good opportunity to learn about various aspects of Firefox as a product. However, being a track chair, I felt a little tied to the desktop and mobile rooms. Of course, our MozCamp organizing committee thought ahead and booked a night out via a double decker, open roof bus ride and dinner. I found that this evening event was a great chance to meet additional people and get to know them in a different setting. I met community members from a number of countries who translate Firefox, several who are looking at translating Firefox OS, and one who translates Bugzilla into Polish, much to the benefit of this small (~100 downloads / release) but thankful community.

To wrap up, I will leave you with a short video of the MozCamp closing, which I think captures the spirit of this event.

Interested in more about MozCamp EU 2012? See The Record.